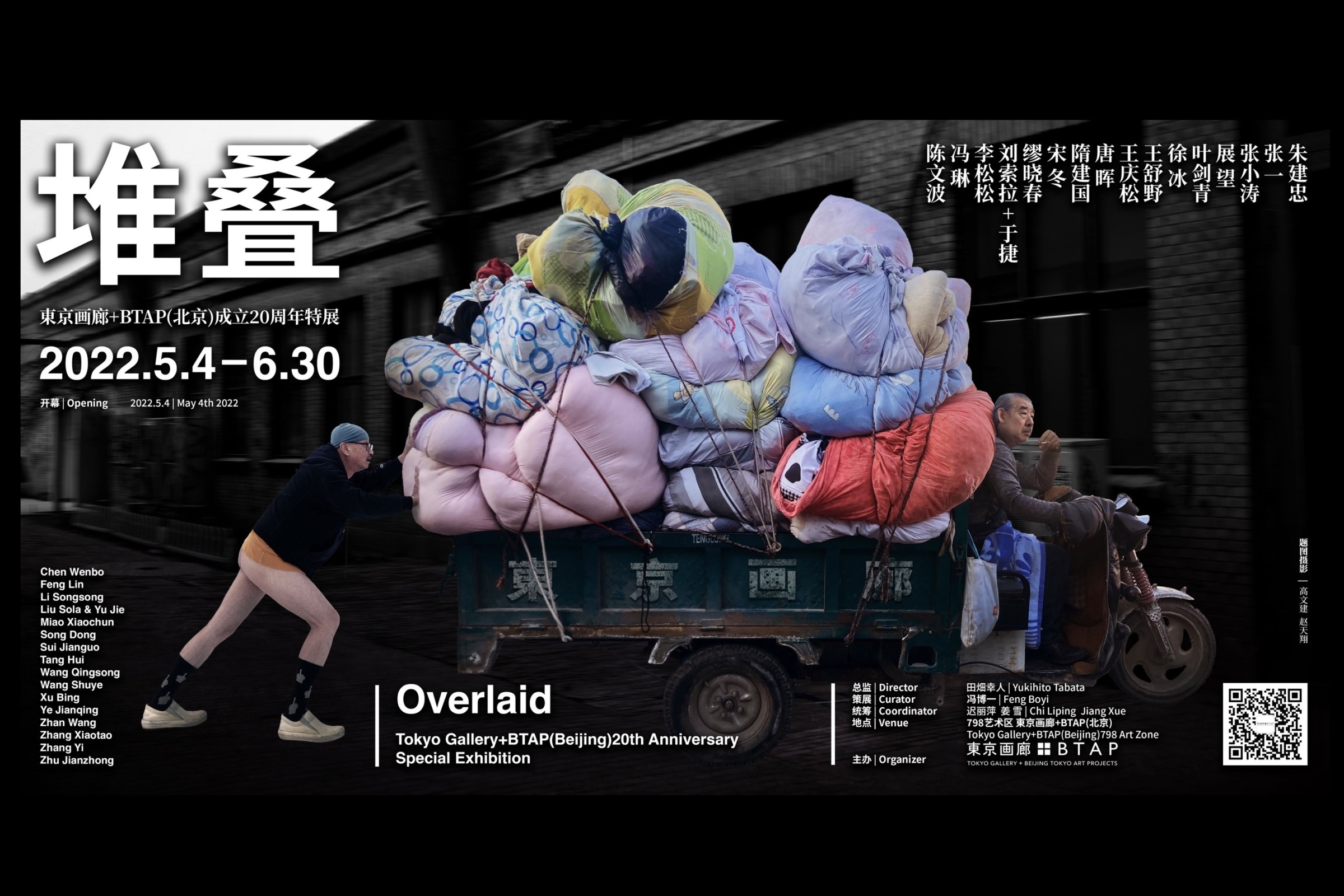 The term ‘overlaid’ literally refers to things being piled up, one layer at a time. In the context of the ‘Internet age’, the act of ‘layering’ refers in particular to multiple switches being grouped together and operating in conjunction with one another, so as to provide a maximum number of ports within a limited space. This implies amalgamation, symbiosis and expansion. The exhibition is themed around borrowing and proceeding from the notion of ‘layering’: not only do the showcased works blend in synaesthetically with the exhibition, this layered approach also serves as an interface through which links and interactions are formed.

For this show, we’ve invited 17 Chinese artists, all of whom have collaborated with Tokyo Gallery + BTAP in the past. For a two-month period, they will exhibit their haphazard, mercurial, far-flung artistic creations through an alternating, multi-media ‘layering’ approach. The exhibition is a testament to the contributing role – and a highly productive one at that – Tokyo Gallery + BTAP has played for Chinese contemporary art throughout its twenty-year tenure in Beijing, a feat worthy of commemoration and celebration. Our sincerest gratitude goes out to the 17 participating artists who with their nostalgic ‘cameo appearances’ have offered their generous support and assistance to the 20th anniversary of the founding of Tokyo Gallery + BTAP (Beijing).

On a curatorial level, certain prescriptions and restrictions are in place. For the opening on May 4th, works by 7 artists will be put on display first. Among them, pre-existing works by Xu Bing, Sui Jianguo and artist duo Liu Sola + Yu Jie will act as a springboard for Song Dong, Zhang Xiaotao and Zhan Wang to base original creations on. Then, each week from May 12th through June 8th, two artists will draw direct inspiration from the previous artists’ exhibited works, alternately creating new artworks are related to those works as they see fit, much like one would do in the game of solitaire. This will then culminate in 17 completed artworks, to remain on show at Tokyo Gallery + BTAP for a three-week period.

As this artistic game of dominoes progresses, the artists may not damage, cover up or disassemble the original artwork. Instead, what occurs is a gamified process of ‘doing whatever works’, in which the artists pay homage, deconstruct, satirize or even challenge and subvert the original work of art. This results in a peculiar exhibition site, characterized by both continuity and disparity, where artists depart from their own unique vantage point. The end goal is to arrive a multi-dimensional, multi-layered superimposition between the respective works, as well as between the works and the exhibition itself. The ensuing, unpredictable configuration is one in which the showcased works and the exhibition itself are mutually ‘overlaid’.

Prominently curated, the show is drawn out via ‘layering’ into a protracted experiment, underpinned by continuous artistic creation and the conspicuity of the creative process. Newly created works are juxtaposed with other artists’ pre-existing works, whose gist and media they end up repurposing. The thusly produced works take on unpredictable, hard-to-pin-down interrelations and configurations vis-à-vis the exhibition itself. As such, the show provides an ‘ego-boosting’ opportunity for emerging artists to ‘break through’, as they transcend patterns of inheriting from and envisioning their predecessors. For the duration of the exhibition, newly created works can spring up at any point, catching the spectator by surprise and adding to the sense of anticipation. This arouses in the participating artists the potential for giving free rein to intellect, humor and playfulness. As Jose Luis Borges once remarked, these creators are backed by an inscrutable, mystical force. Now, at Tokyo Gallery + BTAP, for a finite time and under finite circumstances, this mystical force will make tangible a sort of ‘closed-loop involution’.

Also expected to take place throughout the exhibition are a number of on-site workshops and other educational and promotional events. At the exhibition’s closing event on June 30th, the artists and curator will engage in talks and discussions with art critics and members of the media, to further elaborate on the exhibition.

Zhu Jianzhong was born in in 1954 in Nantong, Jiangsu, China. Zhu graduated from the Nanjing University of Arts, focusing on traditional Chinese painting, in 1982

Zhu is best known for his ink paintings reflecting blue and green hues. His works are characterized as subtle, unobtrusive and dignified.

Zhu has been awarded the Nanjing Chinese Painting Exhibition Prize, the Four Seasons Fine Arts Exhibition Prize. His works are included in the collections of the National Art Museum of China (NAMOC) and the Jiangsu Art Museum.