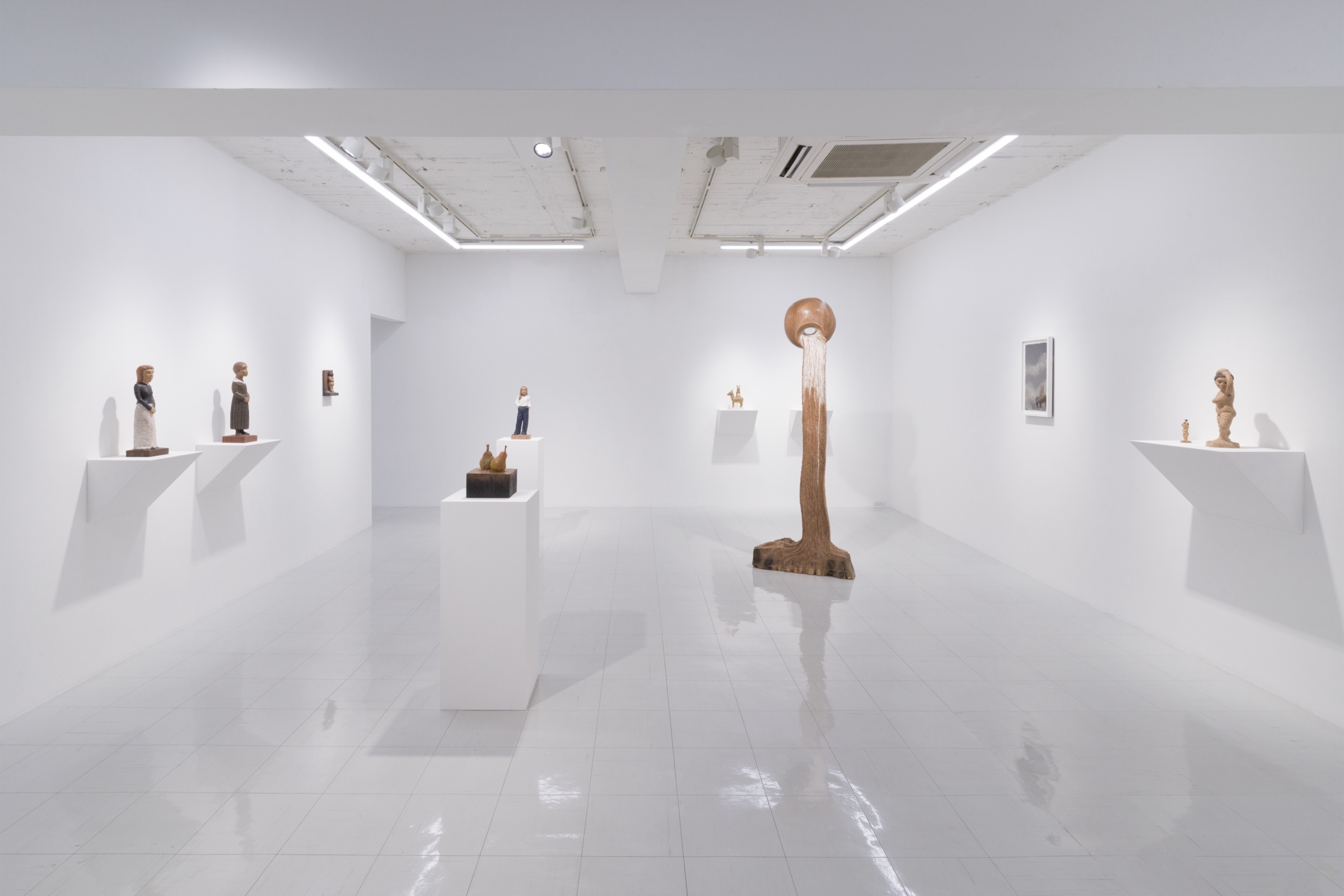 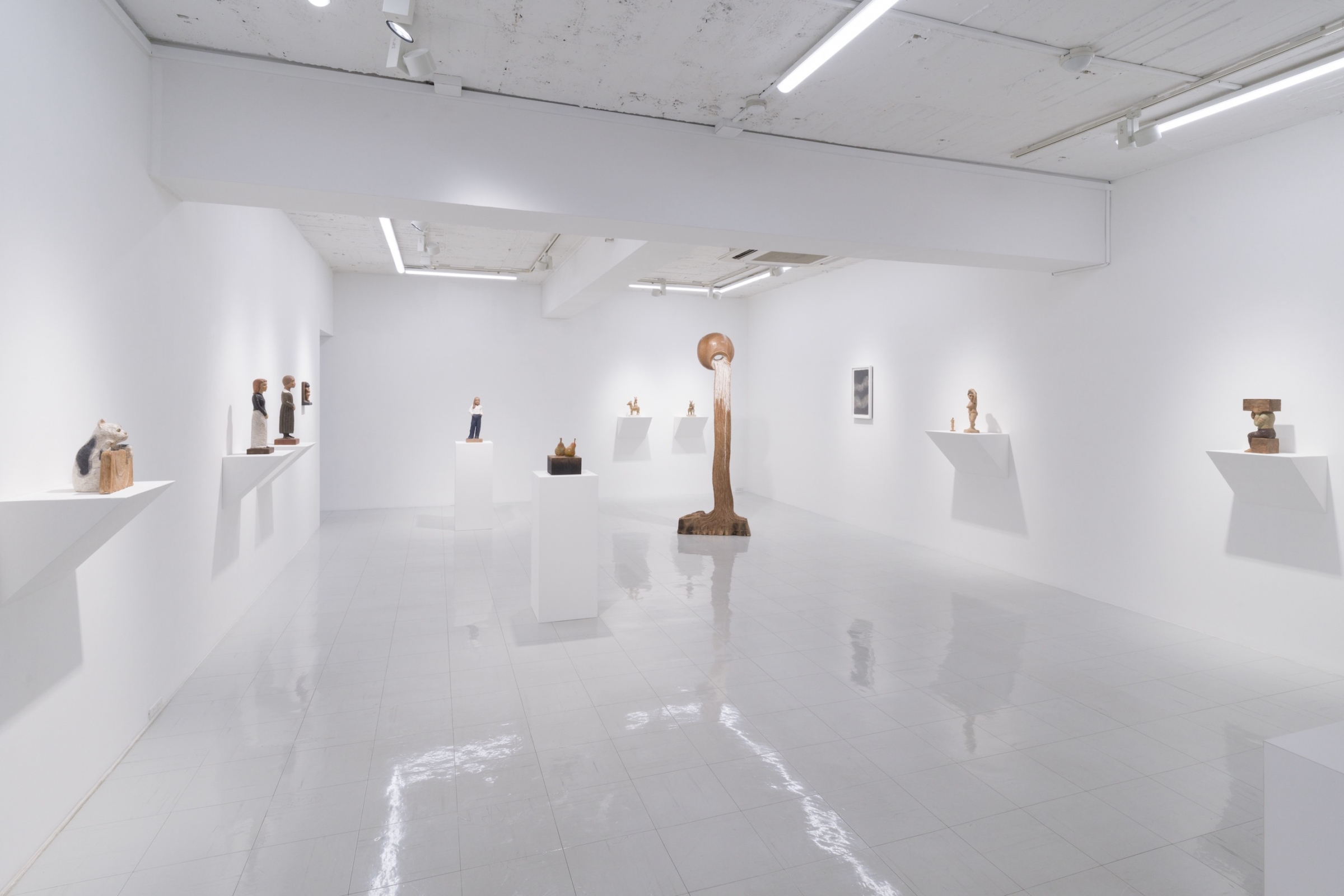 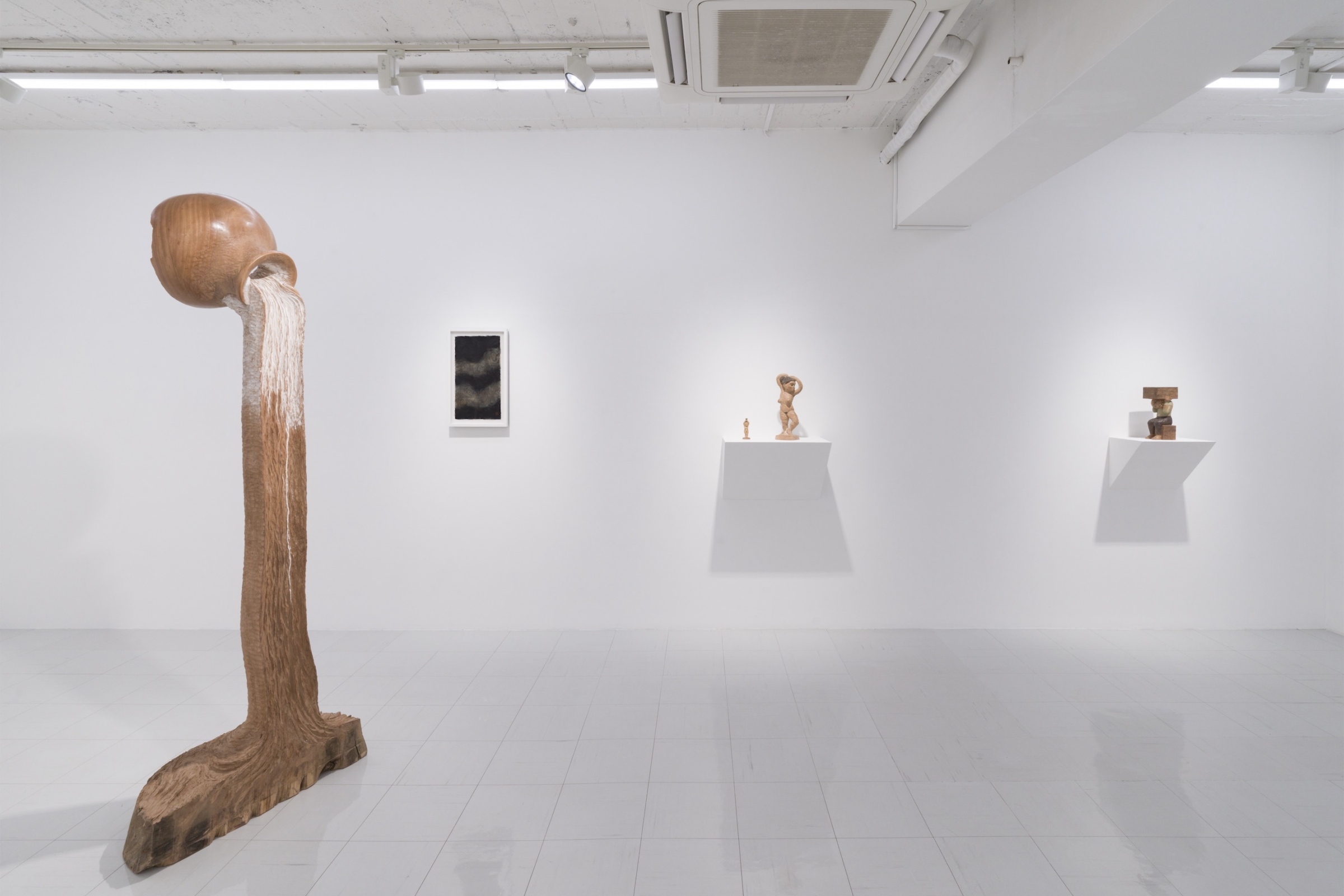 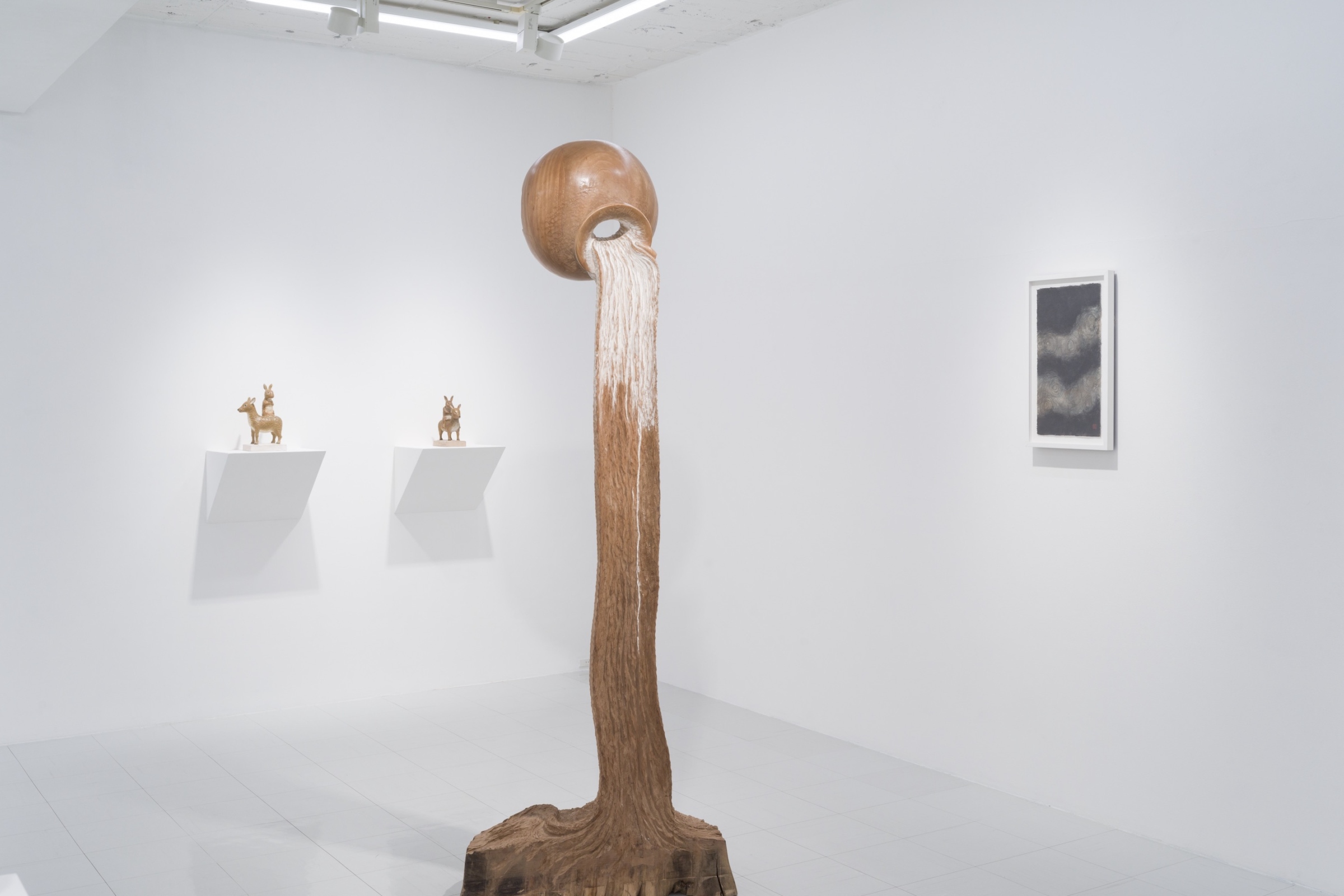 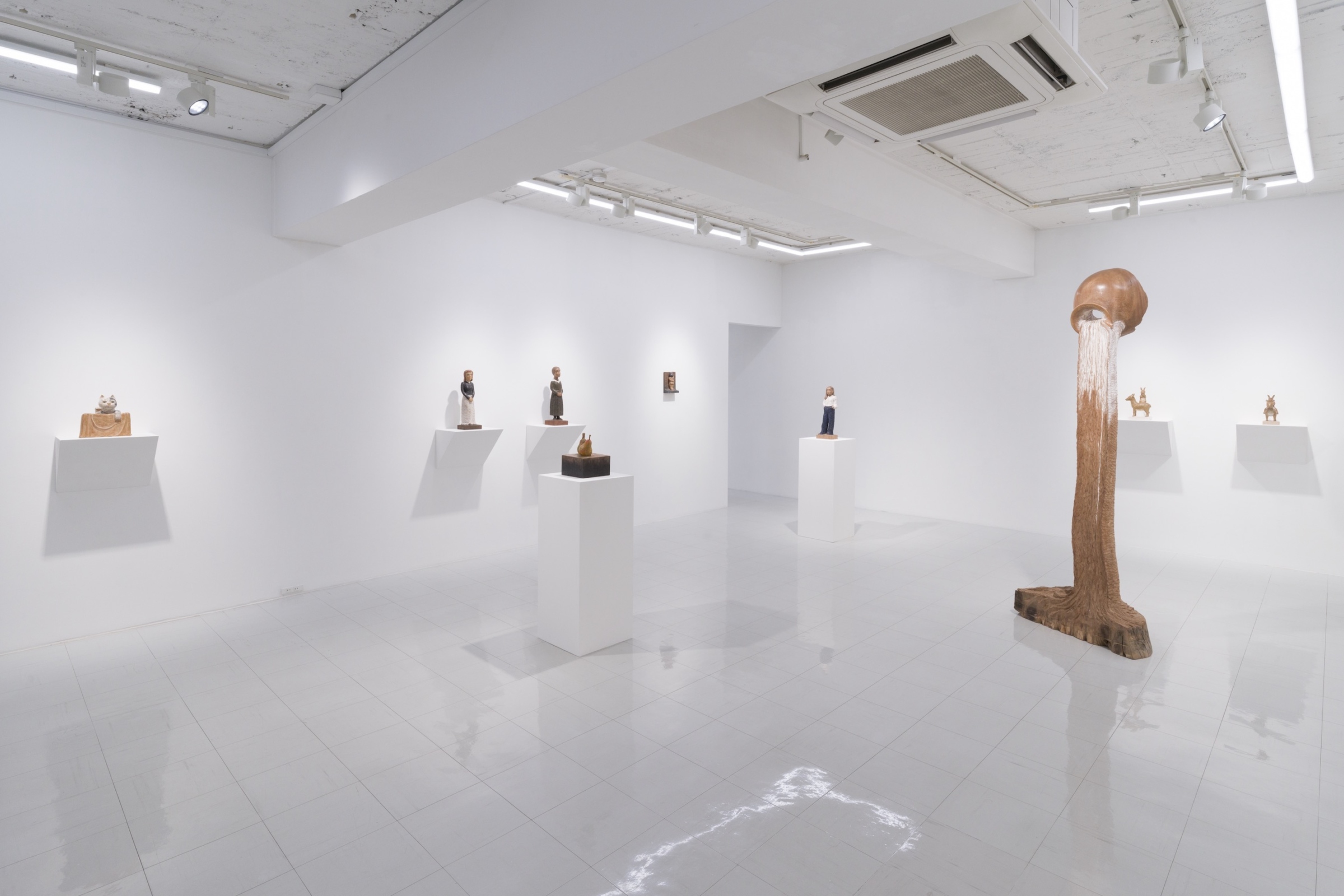 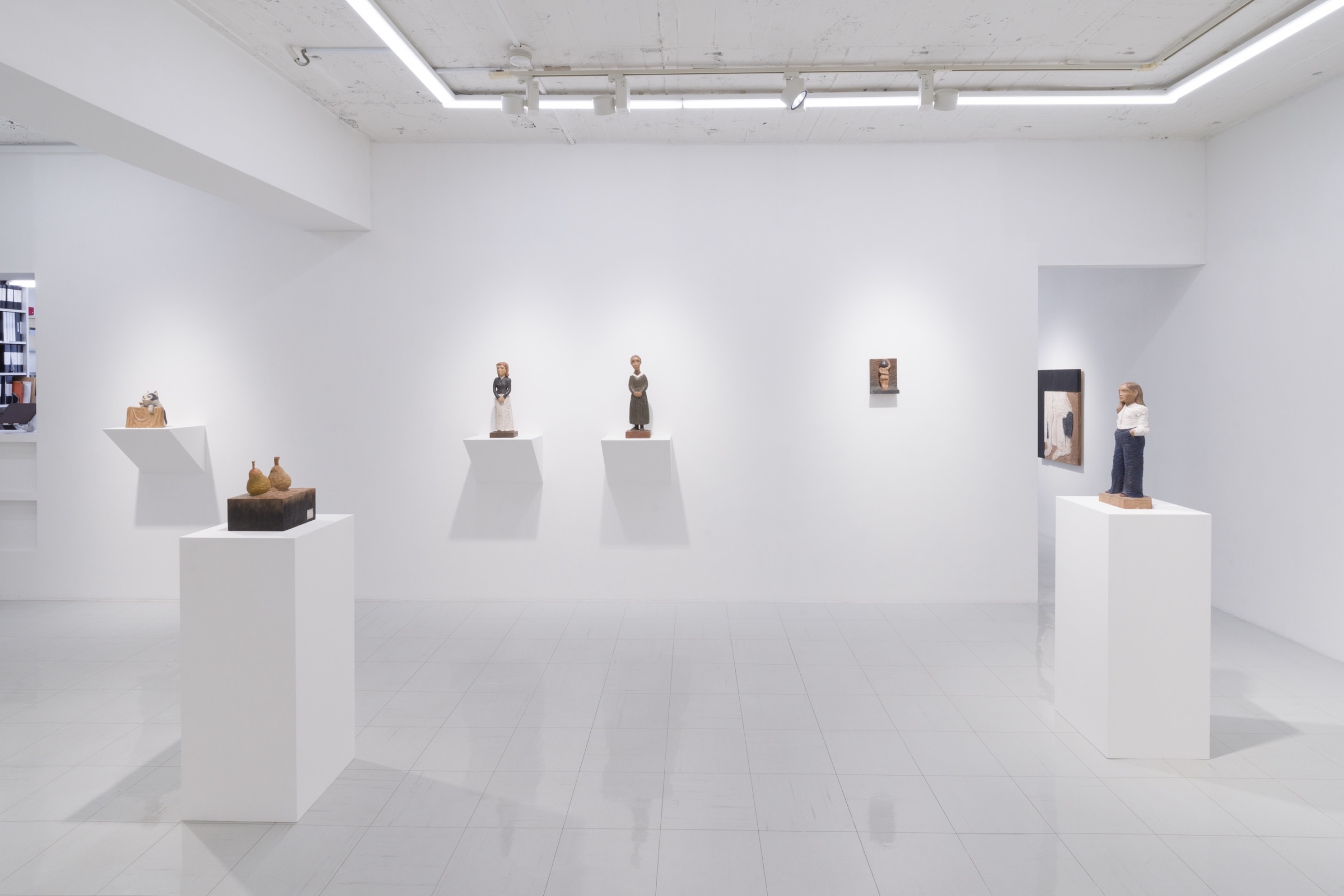 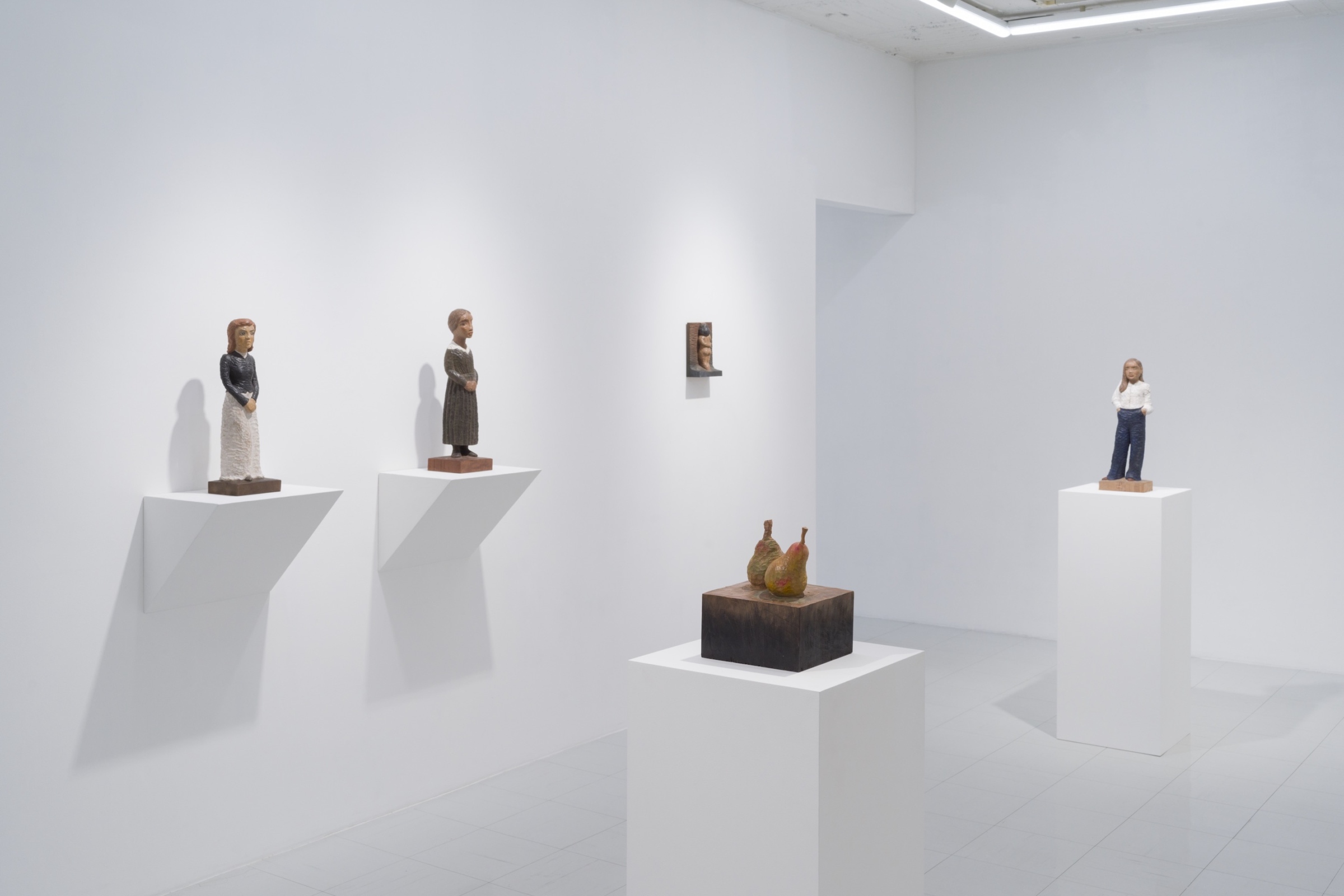 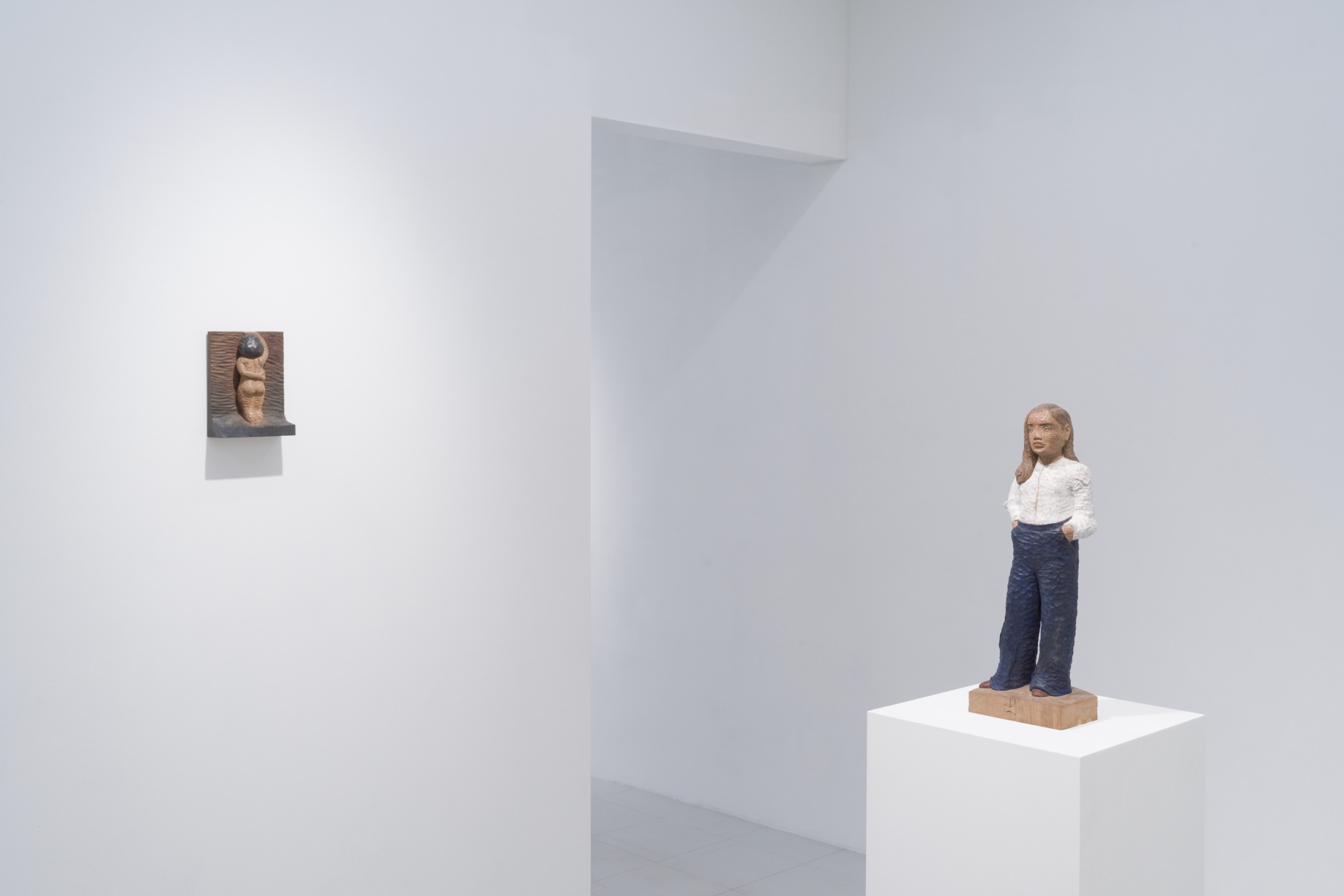 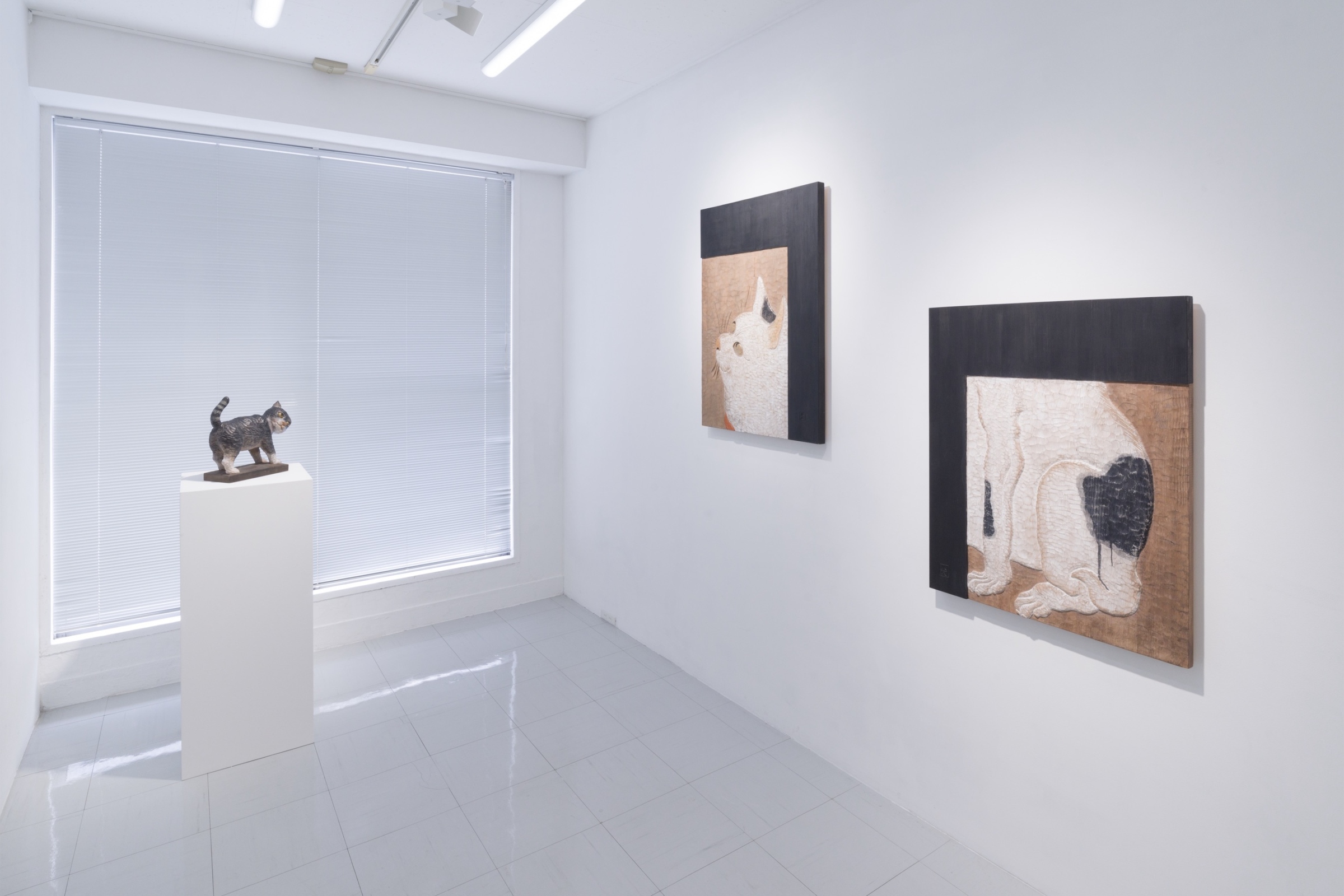 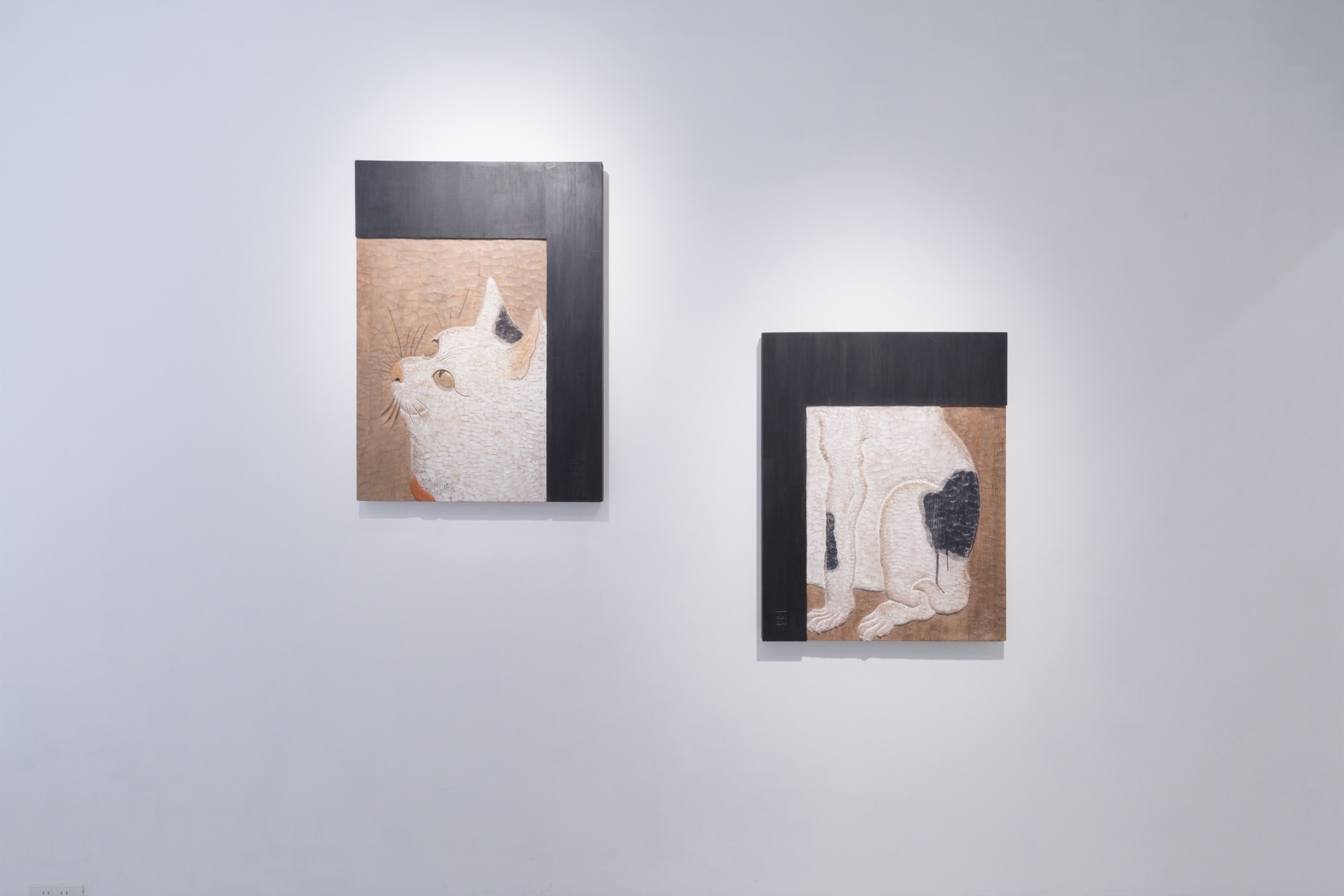 Born in Fukuoka in 1952, Takimoto moved to Italy in 1977 to study under Toyofuku Tomonori, who practiced sculpture in Milan. Takimoto has gone on to build a 45-year career, during which he has created a consistent oeuvre of contemporary wood sculpture works while remaining faithful to traditional techniques. He also is a restorer of classical Buddhist statues. Takimoto spent more time in Italy in 2014 as part of an Agency of Cultural Affairs study programme, and his works were featured in a solo exhibition at Tokyo Gallery + BTAP upon his return to Japan. Sō kara Sō is the second instalment in the Chōsō series.

Influenced by Toyofuku, Takimoto created abstract reliefs in the 1980s before switching to a style that is more representational, albeit restricted to subjects that linger in the viewer’s memory like waterfalls, rivers, clouds, and smoke, in a phenomenon reminiscent of persistence of vision. The chisel marks on the surface of his fluid works are both a record of the act of creation and a symbol of the working of the artist’s mind as he attempts to grasp indefinite images.

After returning from his studies in Italy, Takimoto began creating his Chōsō series of representational works, which draw inspiration from well-known pieces from the history of modern Art. Sō – Ingres' Waterfall (2021), one of the pieces exhibited in this exhibition, references La Source [The Spring], a seminal work by 19th century French artist Jean-August Dominique Ingres, while Sō – Young Woman in a Black Blouse (2022) and Sō – Black Cat (2022) reference the Balthus paintings Portrait de jeune fille en costume d’amazone [Portrait of a Young Girl in an Amazon Costume] (1932) and Le Roi des chats [The King of Cats] (1935). The indefinite forms that Takimoto employs as subjects sublime into elements of his sculptures, as his free and serene carvings breathe new life into historical figures and animals.

As part of Sō kara Sō, a catalogue containing a review by Kagioka Masanori, advisor and former director of the Okayama Prefectural Museum of Art will be produced. We look forward to welcoming you to the gallery.

Mitsukuni Takimoto was born in Fukuoka in 1952. He moved to Italy in 1977 to apprentice to Tomonori Toyofuku, who was active in Milan at the time. Since then, Takimoto has consistently pursued a wood sculpture practice while remaining faithful to traditional techniques. Takimoto also works as an expert in the restoration of Buddhist sculptures. Under the influence of Toyofuku, Takimoto worked on abstract sculptural reliefs throughout the 1980s. In the ‘90s he shifted his style toward a more representational one. However, while these works can be called representational, he chooses only subjects like waterfalls and rivers, clouds and smoke: figures that remain in the viewer’s memory like an afterimage. The chisel marks left on the surface of these fluid shapes are simultaneously traces of the act of making, and a symbolic representation of the conscious effort to grasp indeterminate images.