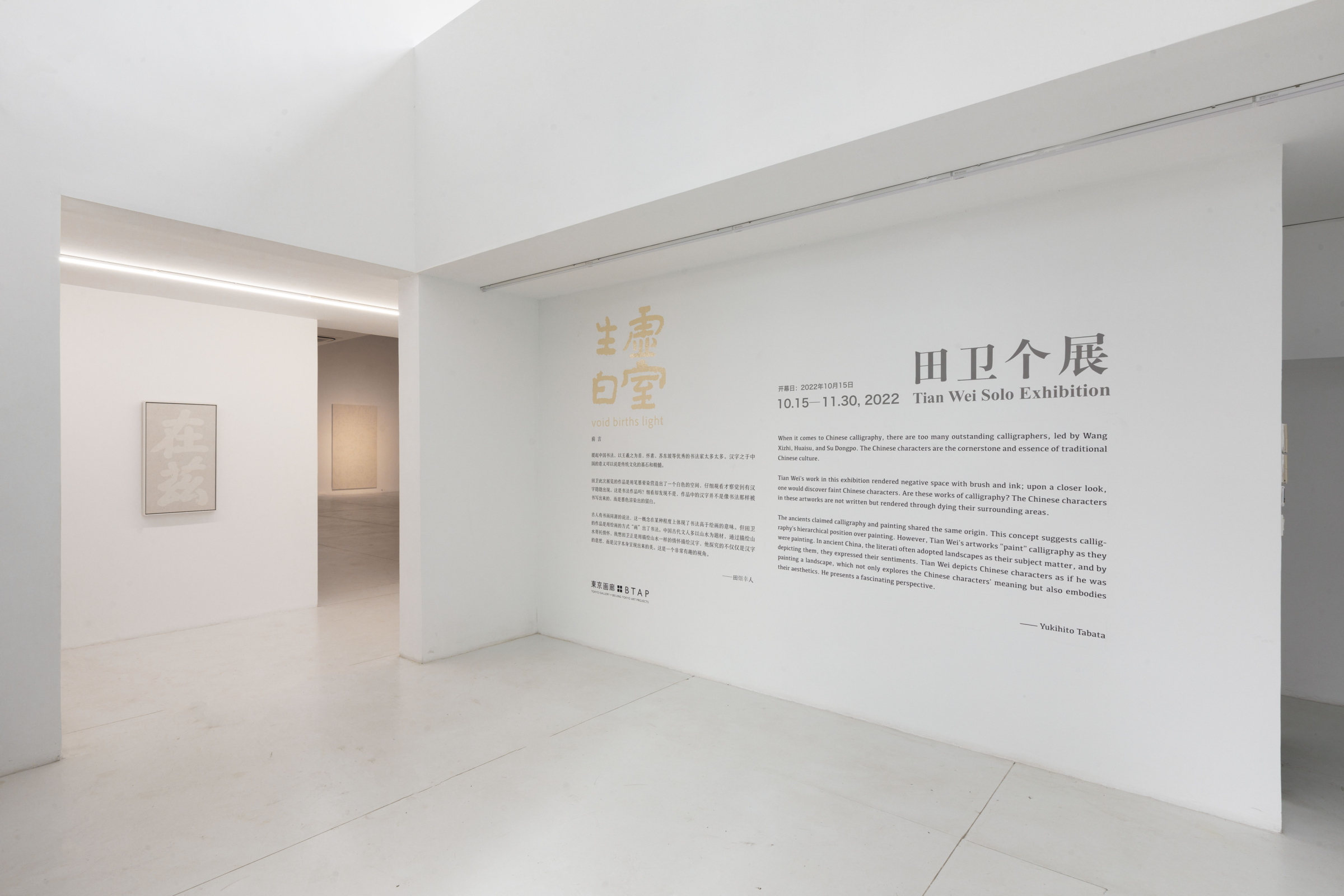 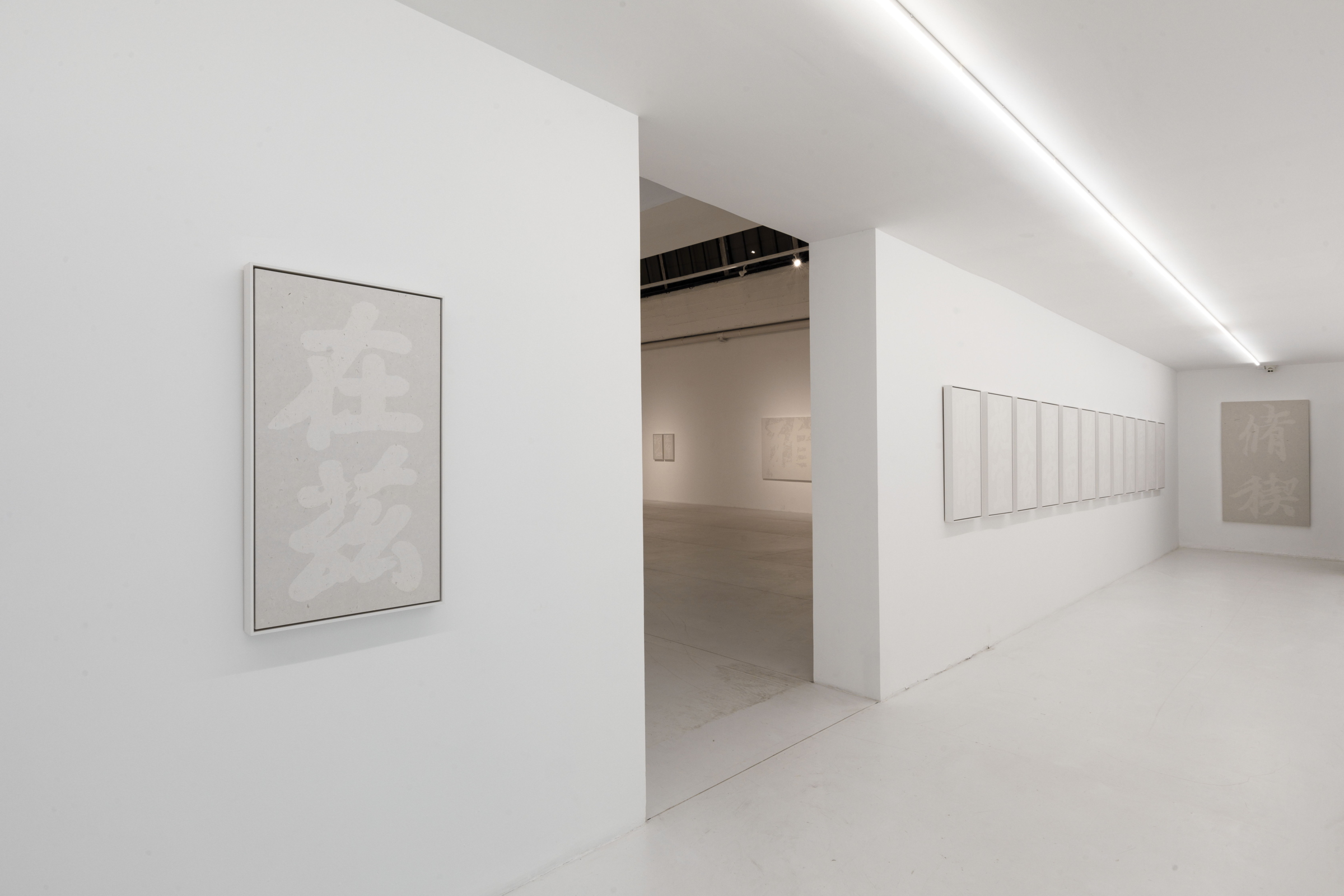 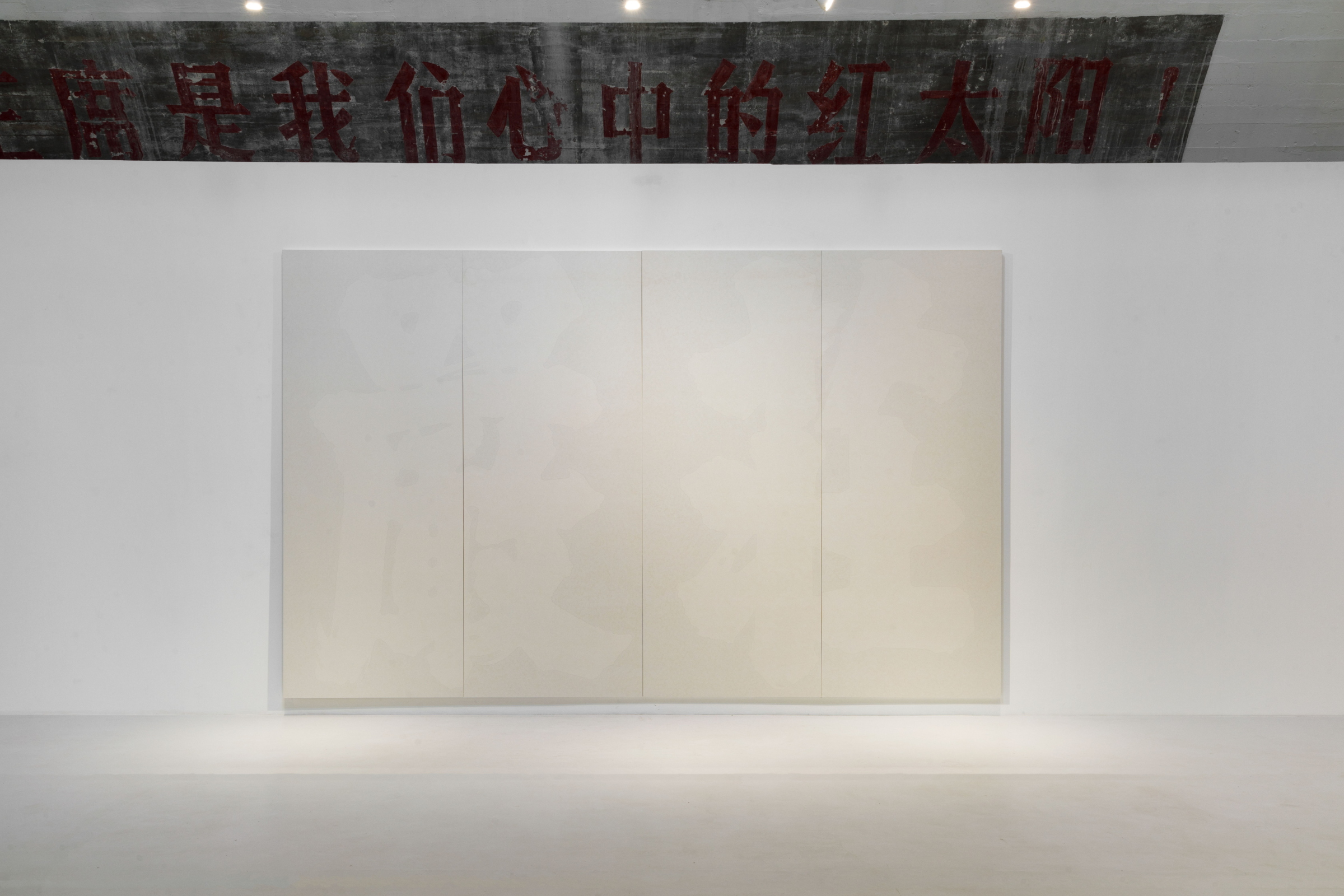 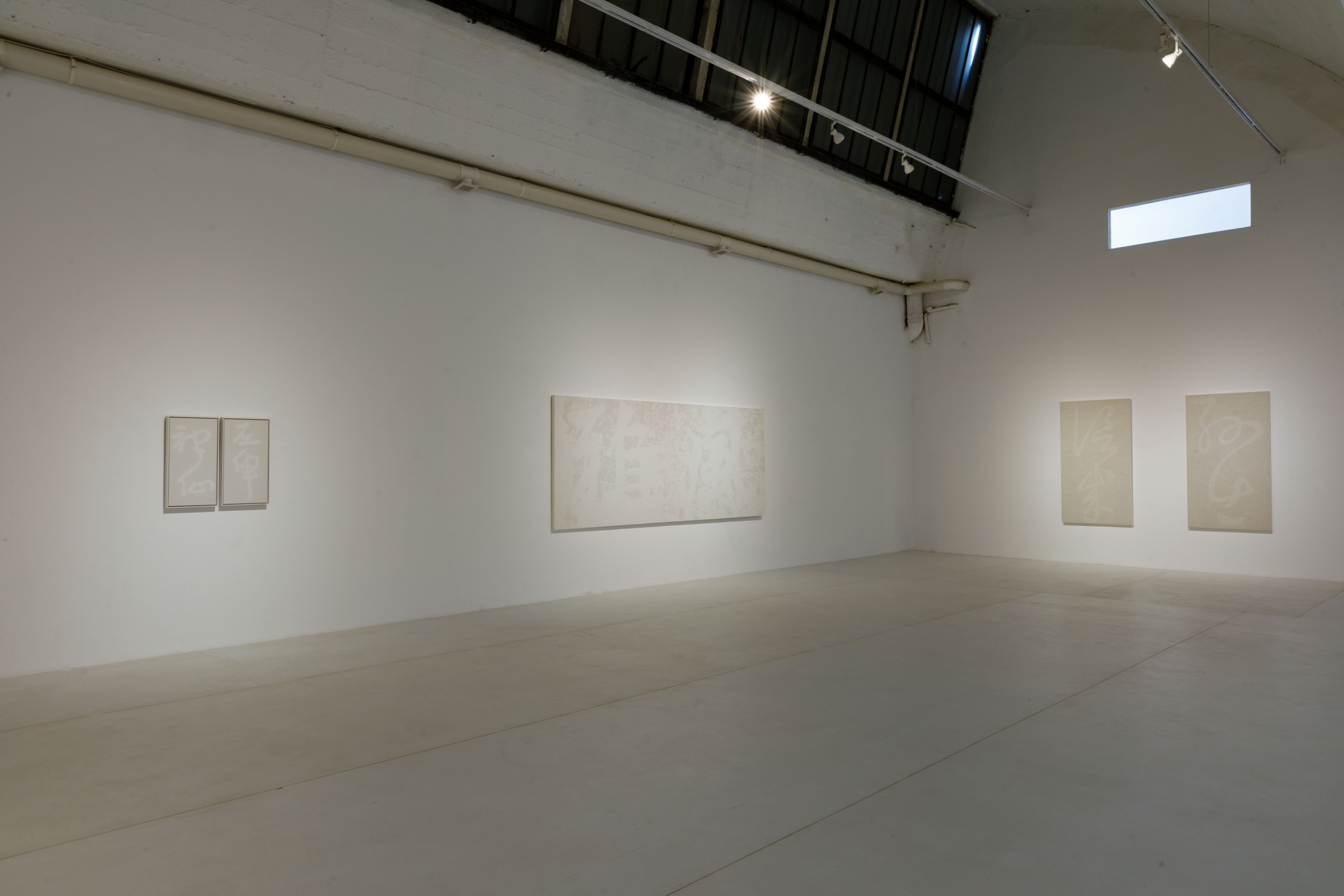 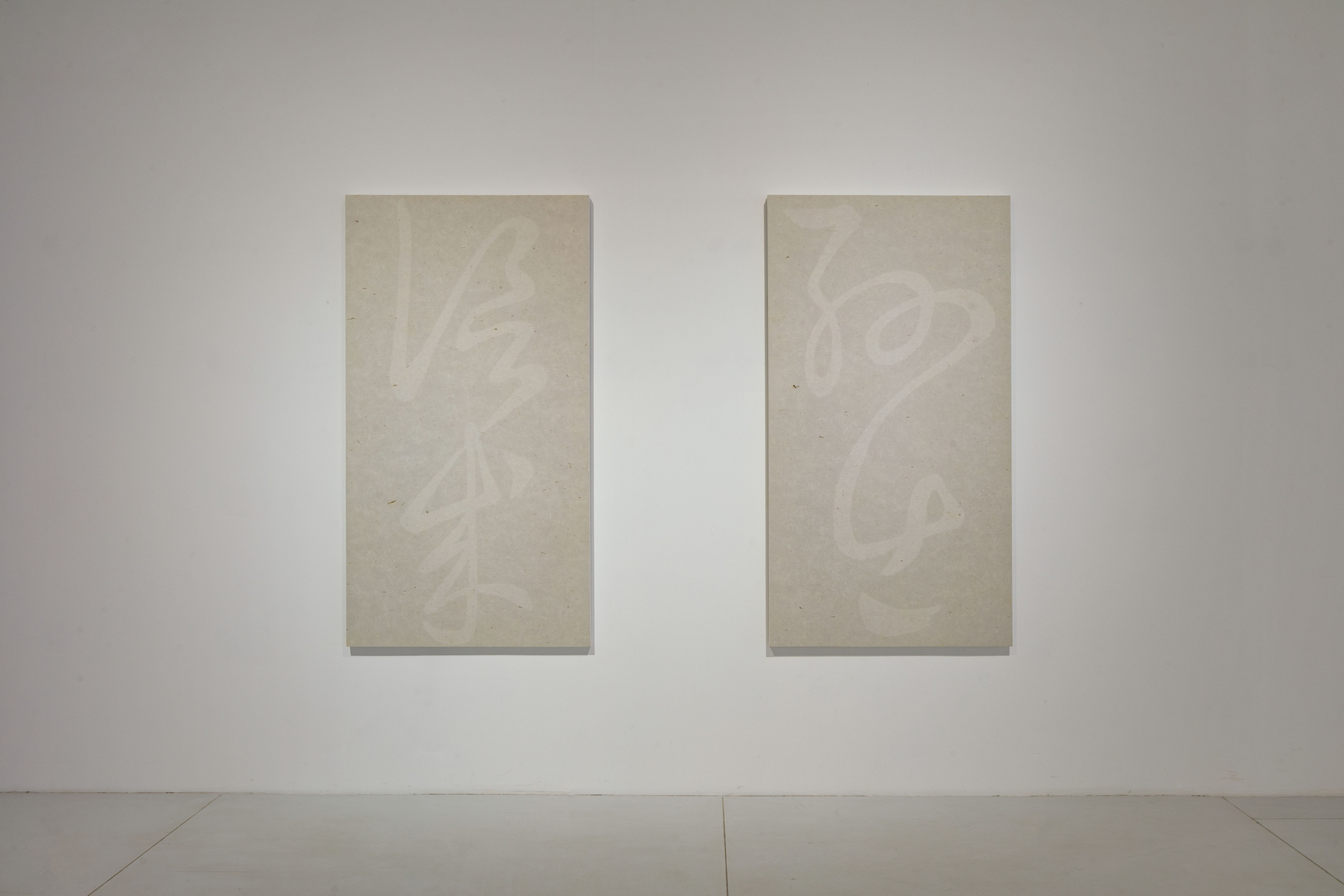 The exhibition features more than ten works of Tian Wei's latest artworks, marking the artist's shift in his practice during the global pandemic outbreak. During this period of meditation and retreat, the elegance of language, the vitality of calligraphy as a fundamental part of Chinese aesthetics, and the overlooked meaning and aesthetics of traditional writing emerged again in Tian Wei's thoughts. He integrates calligraphy with painting, following the example of the Hongwen School of the Tang Dynasty, which reproduced the model calligraphy of the ages with outlines and contours and chose the most straightforward method - "painting the characters." The ink rendered in layers generates a dynamic space, while the negative space reveals the form of the characters. Tian Wei has adopted this approach to reproduce calligraphy from previous dynasties, whose various opacity and forms echo and ripple with one another, offering infinitely lingering thoughts.

The Chinese literati seek gentility and elegance, and such transcendent aesthetic taste is what Tian Wei pursues in this new series of works. "Compared to the sensibility and command of such an aesthetic realm, the techniques that once fascinated me for decades become as light as a feather instantly." After the artist relinquished expressive calligraphic intensity and hid away the sharp edges in his practice, the heart and mind moved with the brush, and his strength turned inward. As he discovered the energy, the momentum for execution became natural. As he chafed ink on paper bit by bit, imagery grew, permeating the surface that would allow the void to birth light.

Tian Wei graduated from the Fine Arts Department of Capital Normal University with a major in Chinese painting. After that, he studied Chinese painting with Mr. Jia Youfu of the Central Academy of Fine Arts and Mr. Du Dakai of the Tsinghua Academy of Fine Arts, respectively. His art practice draws experiences from early training in gongbi and reproducing ancient architectural plans, which builds a unique artistic language while unlearning images to modernize and abstract the sense of time and space of Chinese ink painting.

This exhibition opens on October 15, 2022, at 15:00, and you are cordially invited to visit the exhibition.